When MTV announced Jersey Shore would be filming a season in Florence I was very confused.

Florence is a Mecca for Renaissance history; I walk through streets built by the Medici family, I pass the Duomo every day, I’m surrounded by frescos even in Kent’s building. So why would MTV think this was an appropriate location for partying?

Last night my roommates and I experienced the first of Florence nightlife. We’ve been out to late dinners, which is the norm here, all week, but yesterday was the first we set out for the discos. 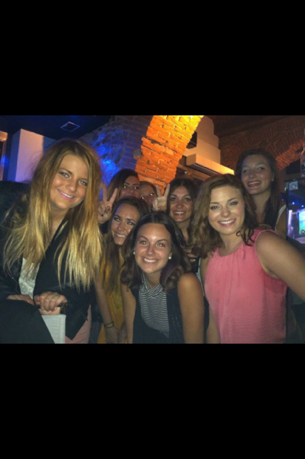 Florence is filled with great student traveling agencies, like Florence for Fun, which we’ve been using to book trips all over. The company’s interns live in Florence and have been so helpful in getting us acquainted with the city (one is even a recent KSU grad). So last night we followed their suggestion to hit up opening night at Naima, a bar near Santa Croce.

We headed out about 11:00, since Santa Croce is a solid 20 minute walk from our apartment. We had no idea what we were about to get ourselves into, but it started as soon as we hit the Duomo.

Promoters are all over Florence always handing out flyers for bar specials, so it was nothing out of the ordinary when a woman approached us with pieces of card stock advertising the drink specials at Grace, a bar that is steps away from the church.

“First shot free” the flyer read. Not a bad way to start the night. So we hustled in, handed our flyers to the annoyed bartender as she passed us small plastic cups filled with Sex on the Beach. One shot, and thirty seconds later we were out of there.

When we reached Naima we were told by FFF interns to mention we were KSU students so we could get a free drink. After making friends with the owner of the bar, “free” became the theme of the night, including the four bottles of champagne he brought out for a group of us.

We decided to consider this unplanned bar crawl by heading over to Space Bar, which the cast of Jersey Shore frequented. A disco, our time there was filled with dancing until the word of the night caught up with me.

I’ll simply conclude this story by saying that Florence got the best of me last night, and I wish there was a Chipotle here.

One thought on “Why Jersey Shore Went to Florence”